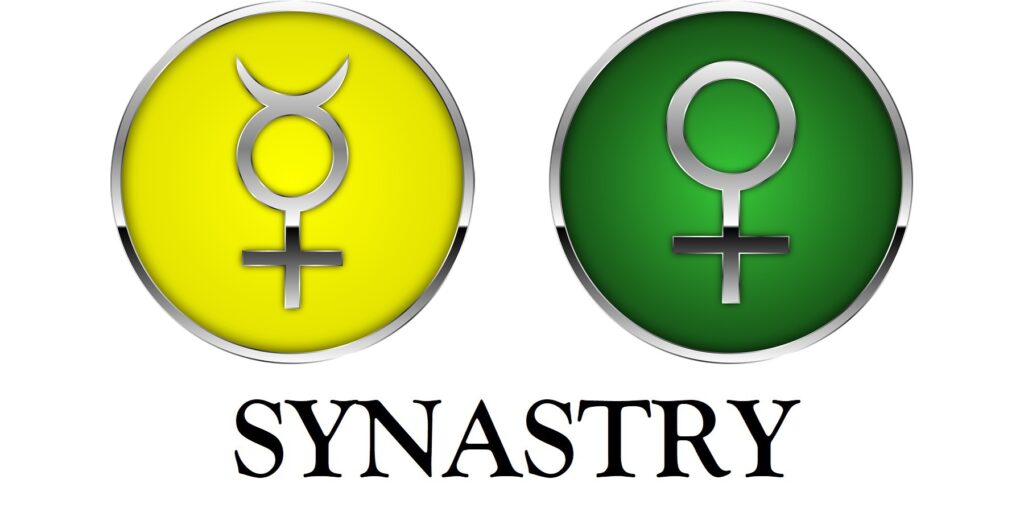 Venus-Mercury synastry combinations emphasize the spheres of intellectual, artistic and cultural interests. The partners’ mutual interests strengthen friendship in any close alliances under trine, sextile and conjunction, but even square and opposition do not necessarily lead to problems but rather highlight the areas where growth is needed and can take place.

The two planets are very close to each other, so Mercury understands Venus and is very delicate and tactful to its emotions. This synastry is very favorable for marriage and relationships between parents and children as mutual understanding is ensured here through personal sympathy and love.

Venus conjunct Mercury synastry is of the classic aspects of friendship and amiability. It’s similar to Moon-Mercury synastry as it also smoothes sharp edges in relationships and glues the partners together. This can best manifest in joint activities like recreation, hobbies, or entertainment. The “Venusian” is pleased with the compliments of the “Mercurial”. They like to talk and reason together, observing and pondering various thoughts and ideas surfacing in the process, and they both get emotional and intellectual satisfaction from communicating with each other.

Thus, Venus conjunct Mercury synastry successfully contributes to increasing the intellectual and spiritual potential of the partners. This combination is very effective for business and domestic relationships, and the mutual passion for the spiritual and aesthetic side could prove decisive in the formation of strong marital and family relationships between these individuals whose mutual understanding and sympathy grow by the hour.

Venus conjunct Mercury synastry makes the partners socially active and involved them with a large number of friends and associates.

In this type of Mercury conjunct Venus synastry, the thinking ability of the man complements the kind and cooperative disposition of the woman who falls in love with his mind. He, in turn, arouses her feminine nature and feelings which warm his logic. The simplicity created by this aspect encourages the freedom of communication and emotional expression: the messenger (Mercury) addresses his beloved (Venus), who is looking forward to hearing his message.

In this variant of Mercury conjunct Venus synastry, the woman is drawn to the man who enjoys talking and spending pastime with her. Sincere ease makes this aspect convenient for both partners. This synastry is marked by the ability to share interests and create a common thread of understanding, especially in matters of love and art.

Venus square Mercury synastry is marked by a complete lack of mutual understanding at the emotional and sensory level, which is reflected in the formation of romantic and marital relationships that are often injurious to both parties. At the same time, disagreements seem to be localized to the affairs of the heart and rarely arise in other areas of life.

The “Venusian” personality can become discouraged because the “Mercurial” one, due to its excessive practicality, does not notice or adequately respond to the manifestation of feelings and emotions of the “Venusian”. The “Mercurial” sees the “Venusian” as too sentimental and impractical. The rationalism of both sides and their obvious overestimation of the emotional and sensual side of the relationship lead to an even greater misunderstanding of what the partnership is really all about; and the excessive analysis clouds sober thinking and leads to extreme impracticality in real life conditions.

With Venus square Mercury synastry, empty talk and petty arguments replace real deeds; however, this aspect is not truly conflicting but rather results in a constant, albeit slight irritation, especially in close alliances. Here Mercury is not inclined to respect Venus, neglects her emotional needs or attitudes and acts cold, dry and calculating.

In this type of Venus square Mercury synastry the woman explores her role as she encounters the feminine side of the man. When she examines the relationship (both from his and her point of view), she tries to accept the female role that is being shown to her. In essence, she asks the man to teach her how to love (Venus), but here she can only understand love on her intellectual level (Mercury).

Under this type of Mercury square Venus synastry, the man tries to teach the woman how to express her love. She may be upset by his bisexual “Mercury-like” vibrations, which present her with an intellectual rather than a virile masculine essence. The man may be subconsciously telling her “Do as I say,” which creates tension and complicates even ordinary and routine communication.

Venus trine Mercury synastry forms unions marked by excellent compatibility of ideas and projects in the fields of art and creativity, as well as in social activity. The partners usually have many mutual friends and easily enter into professional, business, scientific, and educational relationships based on intellectual activity.

The romantic and marital relations of Venus trine Mercury synastry are characterized by high emotional and sensory reactions and the ability to safely resolve any problems that arise in the process of living together. They enrich each other both intellectually and spiritually by maintaining a positive attitude and viewing the world with a healthy dose of humor.

This type of Venus trine Mercury synastry is propitious for compatible partnerships as a noticeable spirit of cooperation pervades the partners’ joint activities. The woman tries to understand the man, and because she loves him, he gains confidence in his ideas, including those that could be considered eccentric by a less loyal audience. Both partners value and understand art, often engaging in collecting it.

This type of Mercury trine Venus synastry adds a note of calm harmony into the relationship. Because of thriving mutual understanding, both the man and the woman benefit from the opportunity to share their experiences with each other. The woman finds her sense of aesthetic appreciation reflected in the man, while he adds true feelings to her intellect. If she has a practical mind, this Mercury trine Venus synastry can be an excellent basis for lifelong communication.

Mercury opposite Venus synastry requires from the “Mercurial” personality to understand the feelings of its “Venusian” counterpart while the latter needs to frankly and honestly tune in to appreciate the rationalism and general direction of the ideas of the “Mercurial”. However, it is easier said than done. For that to happen, various differences in views on a wide array of aspects and realities of life must be extinguished by making compromises and searching for common ground in the affected areas of life.

The “Venusian” often considers the “Mercurian” too abstruse, insensitive and unemotional, while the latter considers the “Venusian” to be sentimental, lazy, and prone to sudden and ill-grounded mood swings. The parties struggle to agree on issues related to financial, business and professional activity, which entails endless disputes that lead nowhere and negatively affect not only the relationship itself, but also the success of any joint activity influenced by the synastry.

Much like Venus conjunct Mercury synastry, this is a highly volatile aspect. The woman may not like the way her partner expresses love. She sees her feminine mystique manifest in the man whose softness and kindness threaten her sexuality. The man, in turn, feels that he never gets real aesthetic satisfaction from communicating with the woman. As a result, her petty annoyance tends to mask a larger and more meaningful conflict that is never truly brought to the surface: that of whether the partners play the proper roles.

In this variant of Mercury opposite Venus synastry the man’s intellect works against his need for love while the woman may feel she is confronted with ideas that take away her sense of well-being. The more she is stimulated by her partner’s thoughts, the less she is able to express her feminine side. This results in a natural conflict between the woman’s need to give love (Venus) and the man’s intellectual response to her (Mercury).

Mercury sextile Venus synastry relationships are distinguished by the kindness and tact shown by both partners as the sphere of their common interests covers the cultural, intellectual, and social side of life.

The ideas of the “Mercurial” persona are a source of aesthetic inspiration for the “Venusian” one, which, due to its perceptive nature, captivates the “Mercurial” from the viewpoint of realizing that what was conceived of intellectually.

Thanks to their high social activity, both partners have many common friends and associates who they spend a lot of time with, which significantly increases their educational level.

In romantic and marital relationships under Mercury sextile Venus synastry, the emotional and psychological connection comes first, which allows the partners to successfully overcome all emerging problems and difficulties through joint efforts.

This synastry is very promising for business relationships in the spheres of beauty and luxury.